The Himalayan Yoga Institute also offers Indian classical dance classes and workshops conducted by a teacher who has professionally performed and taught worldwide for many years. No other technique or dance form has given so much attention to gesture as has Indian classical dance. Spiritually, psychologically and visually, each gesture is thought out to the minutest detail. Bharata Natyam is one of the six styles of Indian Classical Dance. It originated in the temple art of South India and used to be performed as an expression of worship and devotion to the Divine. It was brought to the secular stage in the 20th century and has gained great popularity all over the world in the last few decades. It involves both abstract and mimic dance. The abstract or “pure” dance is characterized by clarity and symmetrical precision. The rhythmic variations and intricate dance patterns are ornamented with graceful poses and hand gestures. The mimic dance uses a highly stylized gesture language, while using the hands and facial expression as important tools in expressing subtle emotions.

Dance beginners who decide to learn this art and would like to attend regular dance classes will be given a chance to delve deeply into this dance form and will learn the basic steps, the hand gestures and various dance pieces in a succession depending on their progress. Workshops are structured in a way as to introduce the dance form, so one can learn the basics and get an overall idea of the background and the constituent parts of this dance form

What will you learn in a workshop? 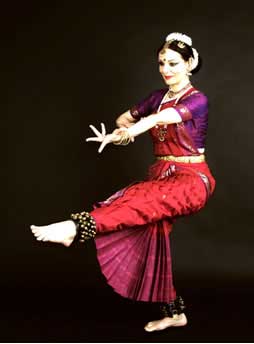 The dance classes are conducted on Fridays and some Saturdays (please check beforehand).You can book a course of 4 consecutive classes within a given month (please note the fees paid for the dance classes are not transferable to another month and are not refundable): GBP 35.00 for a 4 week course – for one calendar month), or GBP 15.00 for a drop in.