Astronomer, mathematician, and physicist Galileo Galilei made an interesting statement. He said that the universe is written “in mathematical language”. He maintained that the mysteries of creation itself could be solved through numbers and mathematical equations. Mystics of all traditions around the world, found that numbers offered more than scientific insight—they offered a secret language for awakening, a key to our own intuition and higher aspects of our being. Yogis found the number 108 to be such a key.

The number 108 has always been a highly revered number for thousands of years, coveted by many spiritual traditions and ascribed special significance in meditation and prayer.  Considered to be the most auspicious number of all, 108 also happens to be the number of stitches on a baseball.

In yoga, the number 108 refers to spiritual completion. That’s the reason why malas used for japa (silent repetition of a mantra) are composed of 108 beads – with an additional “meru” bead, which when reached, prompts the practitioner to count the mala beads in reverse order. Pranayama cycles are often repeated in 108 cycles and even sun salutations are often completed in nine rounds of the 12 postures, which when multiplied, adds up to 108. Ancient yogis believed that we can attune ourselves to the rhythms of creation by completing practices in rounds of this sacred number.

108 seems to be a mysterious number that connects the ancient world to the modern world and also connects the physical realm to the metaphysical realm. The number 108 is sacred in mathematics, geometry, astrology, numerology and in many world religions and spiritual traditions.

Let’s look at some of the reasons why 108 is considered to be a sacred number:

1. It represents the unity and wholeness of existence

According to the mathematician Leonardo Fibonacci, who was born around A.D. 1170 and after whom the Fibonacci sequence is (nick)named, it is believed that the number 108 has a way of representing the wholeness of existence.  The Fibonacci sequence is also related to the golden ratio. The spiral arrangement of leaves or petals on some plants follows the golden ratio. Pinecones exhibit a golden spiral, as do the seeds in a sunflower, according to "Phyllotaxis: A Systemic Study in Plant Morphogenesis" (Cambridge University Press, 1994).

The Fibonacci sequence is one of the most prominent mathematical formulas.

It’s been called "nature's secret code," and "nature's universal rule." It is said to govern the dimensions of everything from the Great Pyramid at Giza to the iconic seashell called Nautilus.

What is interesting though is that Leonardo Fibonacci  (whose real name was Leonardo of Pisa) did not actually discover the sequence. Instead ancient Sanskrit texts that used the Hindu-Arabic numeral system first mention it, and those predate Leonardo of Pisa by centuries.

What’s amazing is that the 1.08 constant growth rate the nautilus uses to build its spiral shell involves the same pattern which repeats every 24 numbers in the Fibonacci sequence. 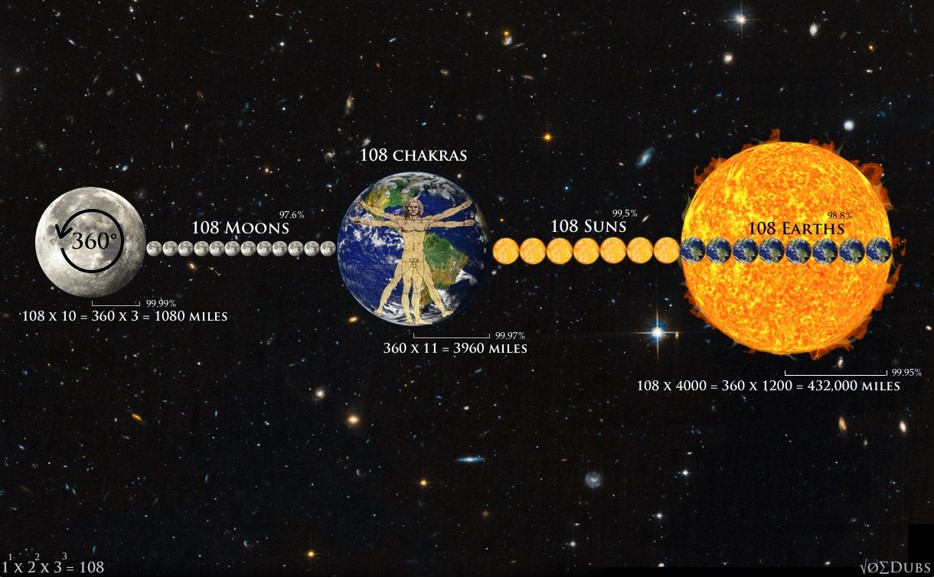 2. 108 in mystical traditions and numerology

Numbers can be seen as messengers. When the number 108 appears in our life it may mean that we are about to attain a long-desired goal or achievement. The number 108 consists of the individual numbers 1, 0 and 8. The number 1 represents authority and leadership. It also represents new beginnings, taking initiative, and embarking on a new path of progress.

The number 0 is a mysterious one in that it represents both nothingness and eternity, but when combined with other numbers it will amplify the vibrational influence of the other numbers.

The number 8 is related to power and influence, abundance and achievement and the power to manifest desired outcomes. When this vibration becomes dominant in our lives we can expect to wield a great amount of influence in the chosen area of interest or in our professional lives.

Another explanation is this: 1, 0, and 8: 1 stands for God or higher truth, 0 stands for emptiness or completeness in spiritual practice, and 8 stands for infinity or eternity.

The number 108 may also be thought of as a special number or a special combination that represents the number 9. Number 9 is considered to be a highly spiritual number and entrusts us with a high spiritual energy associated with altruism and humanitarianism. So when number 9 “shines” through the number 108 it signals that we should share our gifts and abundance with those less fortunate than us. The abundance we attract, we must remember, has come to us by aligning with the Divine Source. Conversely, when we align our thoughts with the Divine Source, our whole attitude changes and we become generous, altruistic and benefactors of the world, naturally – all the while maintaining a sense of gratitude for all that we have.

The Divine Source keeps giving without expecting anything in return. We can best maintain a connection to that source by an attitude of gratitude and generosity – such an attitude will continue to attract prosperity into our lives, materially and spiritually.

On the Shri Yantra there are marmas (points) where three lines intersect, and there are 54 such intersections. Each intersection has masculine and feminine qualities, which represent Shiva and Shakti. 54 x 2 equals 108. Thus, there are 108 points that define the Sri Yantra as well as the human body. 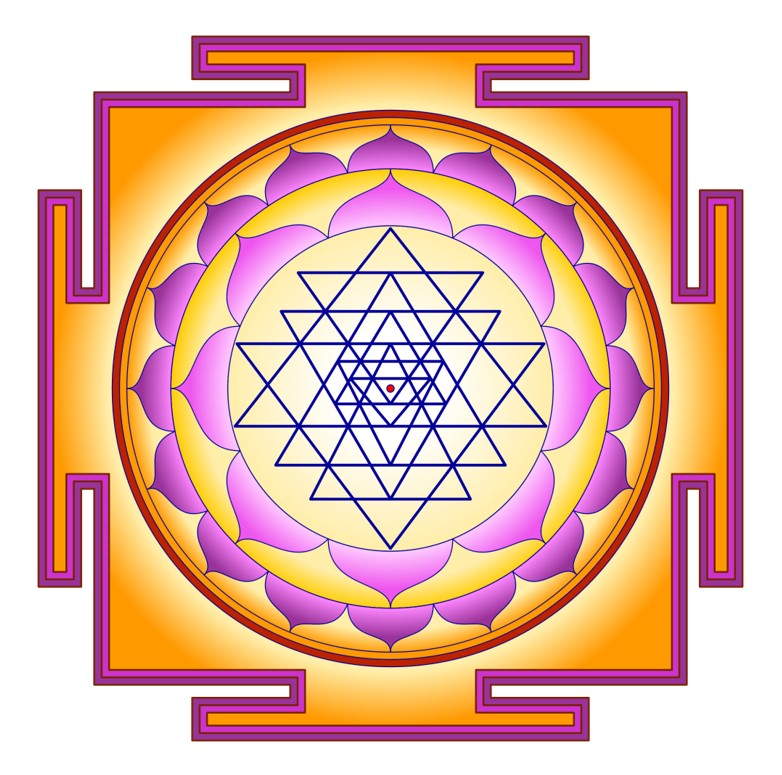 The chakras are the intersections of subtle nerve channels or nadiis, and there are said to be a total of 108 nadiis converging to form the heart chakra. One of them, sushumna leads to the crown chakra, and is said to be the path to Self-realization.

In Buddhism, it is among the tenets that there are exactly 108 types of defilements – no more and no less. This could be the reason a bell is usually chimed exactly 108 times in Japanese Buddhist Temples to mark the end of an old year and to usher into a new year.

6. There are 108 earthly temptations

In Buddhism, it is also believed that the road to nirvana is laden with exactly 108 temptations. So, every Buddhist has to overcome 108 earthly temptations to achieve nirvana. In addition, the ring of prayer beads worn around the waist of Zen priests is usually made of 108 beads.

All their holy writings in Tibet, as much as it is, have been divided into exactly 108 sacred books. Tibetan Buddhism also believes that there are 108 sins and 108 delusions of the mind. Some of these sins and delusions are callousness, blasphemy, anger, abuse, and aggression.

8. The basis of all creation

A certain aspect of Indian cosmology defines the number 108 as the basis of all creation. The number ‘1’ in 108 represents Divine Consciousness. Zero indicates null or void implying that everything on this Earth is vanity since all creatures are here only temporarily. Eight represents the infinity of creation.

There are 12 zodiacs and 9 planets and when multiplied, we get 108. Additionally, there are 27 lunar mansions and they are divided into 4 quarters. When 27 is multiplied by 4, the result is 108.

Kathmandu is said to be the capital of Buddhism and there are exactly 108 images of Lord Buddha, erected in and around the place in reverence of the Buddhism deity.

Each deity in Hinduism has 108 names.

12. Sarsen Circle Stonehenge has a diameter of 108 feet

Sarsen Circle Stonehenge, in the UK, is one of the world’s most famous prehistoric monuments. Interestingly, it has a diameter of 108 feet. The structure of the monument is similar to that of PhNom Bakheng, an ancient Shiva Temple located in Cambodia. The temple also has 108 towers around it.

Both Buddhism and Hinduism believe that every human being has 108 different types of feelings. 36 of these feelings revolve round their past, 36 revolve round the present, and the remaining 36 are based on their dreams and future ambitions.

14. The significance of 108 degree Fahrenheit

When the internal body temperature reaches 108 degrees Fahrenheit, the vital organs in the body will begin to shut down.

Ancient Indians were astonishing with mathematics and they were the ones that discovered the significance of the number – 108 a long time ago. First of all, they discovered the links between 108 and 9, a more sacred number. The link between 9 and 108 is much more than one being a multiple of the other. Here are some of the interesting mathematical relationships between 9 and 108.

Other reasons number 108 is sacred

There are exactly 108 sacred sites (also called pithas) all over India. There are 108 Upanishads, and there are 108 Marmas with regard to Ayurveda. There are 108 stars in Chinese astrology and while 72 of them are malevolent, the remaining 36 are beneficial. Tibetan legends are made of 108 Masters and 108 initiates.

108 saints are celebrated in Japan and they are also known as Vajradhatu. The Buddha has 108 names and there are 108 lamps devoted to him. Both Lord Vishnu and Lord Shiva have 108 names each.

The division of Christian holiday from Soul’s day which is on November 2nd to 25th December has 54 days and 54 nights. The significance of the number lies in the fact that within those two dates, light transformed into darkness a total of 108 times and the reverse also occurred the same number of times.

Most Buddhist temples usually have 108 steps and 108 columns. A very good example of such temples is the temple at Angkor. The temple is built around 108 huge stones.

In conclusion, we may say that the sacredness of 108 began in ancient times but it is not likely that the origin will be discovered. What we may discover are the hidden reasons for it being regarded a sacred number. 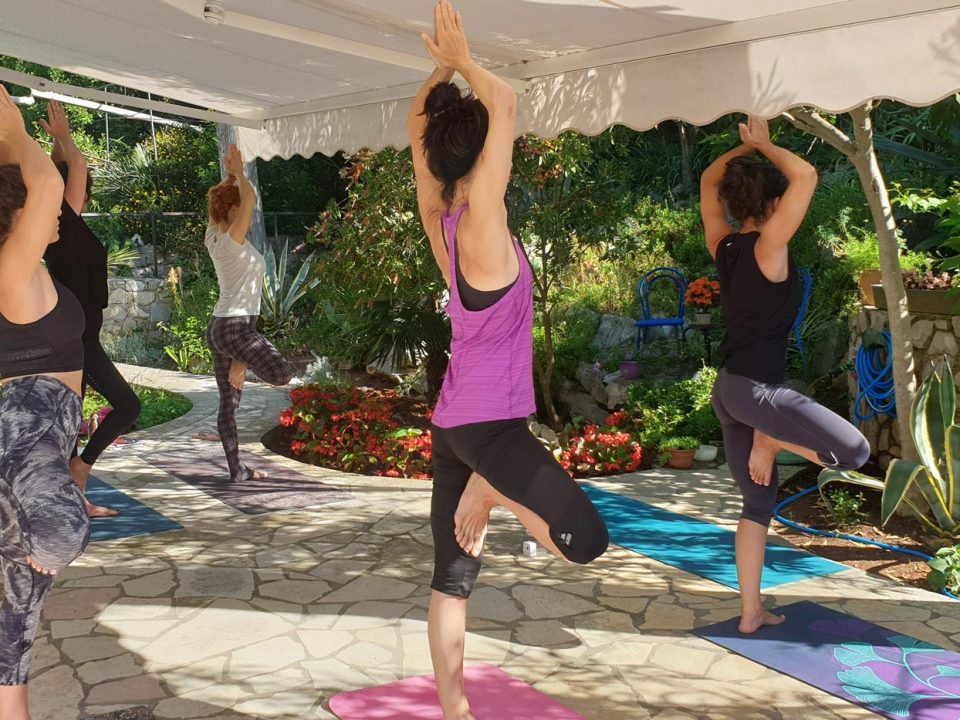 How to Avoid Injuries During Yoga Practice