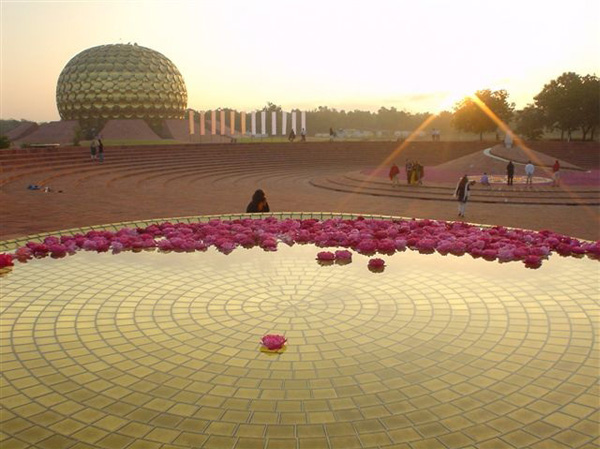 Visiting a model community in India

Last year in autumn we went to visit Auroville in South India spending a few days in this fabulous community which inhabits people from more than 70 nations who have come to live here and build a model society. Auroville is an experiment and is based on the principle of ‘Unity in Diversity’, where people of all nations would come together to build a model society. Today some 2300 people live and work in Auroville, which used to be a desert but has today become a beautiful green oasis.

Auroville is a universal city in the making for a population of up to 50,000 people from around the world. A goal which is gradually being achieved. What struck me the most is the fact that Auroville has been an experiment not just in human unity and consciousness, but also a place where one can find the latest applications of all forms of alternative living and lifestyles, including but not limited to alternative energy sources, like solar and wind energy, organic farming and permaculture, great innovative (even futuristic) architecture, creative education away from the purely academic approach, a wide variety of alternative healing methods and yoga styles, experimental arts and ecology.

The Matrimandir (literally, “Mother’s temple”), pictured in the above image, is a round-shaped sphere that houses in its center a chamber, all white with a transculent crystal globe at the centre lit by single ray of sunlight. This signifies “future realisation”. In 1968, Mirra Alfassa formally inaugurated the new city, and the soil of 124 nations (all the independent countries in the world at that time, who sent their representatives) was placed in a lotus-shape urn at the centre of the future city.

It’s a very intriguing place which I have visited many times over the years, but this time I went for a very special purpose and that is to finalize the purchase of land for our new ashram in Southern India, which we will be using for our yoga teacher training courses and retreats in the future, besides the existing ashram in the Himalayas and our charming venue on the isle of Losinj, Croatia. I went together with two of our junior student teachers who assisted on the teacher training course in India, Bhaktimaya and Tarini. 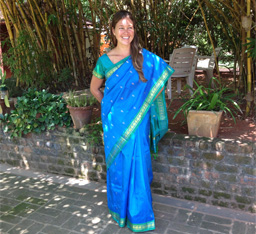 Here you can see Bhaktimaya wearing a sari for the first time. We bought the sari in Chennai, the capital of the South Indian stateTamil Nadu. We went to one of the biggest sari stores and were dazzled by the variety of colours and patterns. In the end Bhaktimaya chose a beautiful peacock blue with a green border which suits her very well as you can see. The peacocks of Auroville were quite intrigued by her.

On the left Bhaktimaya is practicing mudras as taught in Indian Classical Dance. We rehearsed the moves before taking the pictures:). In the other picture on the right you can see her being fixed up by our dear Tamil host at the Auroville guest house where we stayed.

Where is our new site located?

Our newly acquired land is located near Auroville and is about 3 km from the town of Pondicherry. The surrounding area boasts of towns, cities and temples demonstrating the artistry and beauty of ancient Indian cultural history.

We are about 90 km away from the UNESCO world heritage site, Mamallapuram (also called Mahabalipuram), displaying gorgeous stone carvings and temple structures of great beauty. I have included some picture of Mamallapuram and Pondicherry below.
Mahabalipuram is an ancient historic town and was a bustling seaport during the time of Periplus (1st century CE) and Ptolemy (140 CE). Ancient Indian traders who went to countries of South East Asia sailed from the seaport of Mahabalipuram.

By the 7th century it was a port city of the South Indian dynasty of the Pallavas. It has a group of sanctuaries, which was carved out of rock along the Coromandel coast in the 7th and 8th centuries: Rathas (temples in the form of chariots), Mandapas (cave sanctuaries), giant open-air reliefs such as the famous ‘Descent of the Ganges’, and the Shore temple, with thousands of sculptures dedicated to Shiva.

Our new site is located about 2 km from the beach and is a large piece of land of about 2 acres, with good soil for cultivation which is perfect as we plan to incorporate an orchard and vegetable garden to produce our own home-grown fruits and veggies. But most importantly we want to create a haven of peace and tranquility which will allow visitors and residents alike to experience the deeper effects of the yogic practices, which they will be able to indulge in, namely asanas, pranayama and meditation. Lots of emphasis will be given to the development of the natural surroundings, the gardens and ponds. The gardens will be styled in the tradition of zen gardens with cascading waterfalls and quietly secluded areas for meditation and reflection.