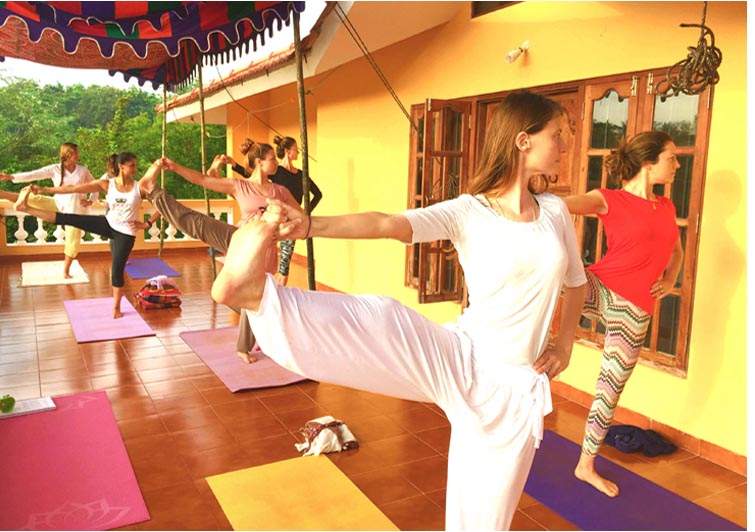 There Is More To Yoga Than Meets The Eye

At this time and age when people are so intensely and often exclusively focused on physical reality including their own physical bodies it can be quite a challenge for yoga teachers to get across the idea that yogic anatomy is far more concerned with the subtle energetic body than with the physical body.
The truth is – physical anatomy in yoga is of secondary importance especially muscle anatomy.

Yogic anatomy is worlds apart from Western physical anatomy, even though certain aspects are incorporated and of interest to yogis – but it’s not the muscles.

Having said that I also have to say that yoga in the modern Western world has taken a different route and it has been marketed as another form of exercise. This is why muscle anatomy has come to the forefront nowadays.

We nowadays find tons of books, articles and videos/talks on the topic of which muscles are engaged and/or passive in a certain posture. Though this may have some value, it takes the whole emphasis away from the true underpinning of yoga. To a certain degree it actually diverts attention away from authentic yogic anatomy.

The ancient sages and yogis never, and I say this emphatically, NEVER concerned themselves with the question of what muscles are used in a pose such as for example Dhanurasana, the bow pose.

As surprising as it may sound to many modern day yogis, human physical anatomy was not much of a consideration in the practice or teaching of yoga until recently. Instead yogis were far more interested in the effect of asanas on the pranic system, the chakras, nadiis and vayus. If at all they were interested in how the postures affect the physical body, it was with reference to how the endocrine and nervous system were affected – due to the intimate relationship between those physical systems and the subtle pranic system.

Yoga was considered an energetic discipline and the body was considered to be an instrument whose fine-tuning would awaken and arouse the hidden psychic and spiritual abilities of the person. Yoga asanas were an advanced and mysterious tool used to eventually manifest Divine Consciousness in human form.
When looking at the photos of some of the most revered modern gurus it becomes apparent that they hardly concerned themselves with form and alignment. Many of their postures could be corrected by novices – who may have attended a few (modern!) yoga classes.

Western culture, generally speaking, has a strong leaning towards what we in yoga call the gross, material body. Throughout our lives we are being taught to identify with the physical body and relate to ourselves essentially as physical beings. The entire culture is permeated by a materialistic worldview which emphasizes the physical aspect of our existence within a material universe. With the emergence of quantum physics and the latest theories of a conscious universe we are of course, very slowly but surely veering away from such a worldview, perhaps reconnecting to the ancient truths that we are far more complex and subtle beings, and that the body is just a visible manifestation of the light, energy and consciousness that we are.

Yoga anatomy encompasses both the energy and subtle body systems, which have been largely ignored when Hatha yoga was incorporated into contemporary Western culture. Unfortunately this has permeated large segments of the yoga community and you will rarely find a yoga teacher who knows, let alone teaches, subtle yogic anatomy. This is so because most modern teacher training courses focus mainly on muscle anatomy.

Modern yogis and especially aspiring yoga teachers would be well advised to develop a keen interest in understanding asana from the standpoint of subtle anatomy. Similar to how Western science has mapped the physical body, the yogis and masters of the East created an equally detailed map of the subtle and energy bodies.

On our yoga teacher training courses we cover in-depth the anatomy of the subtle body and how asanas and other yogic techniques influence those systems. This has been an integral part of the Rajadhiraja system of yoga, which has carefully examined how physiology affects the chakras and subsequently the mind. The mind-body relationship was deeply examined and understood by yogis.

Hatha yoga has emerged from Tantra as most recent evidence as well as oral Tantric history has shown and in the major texts of Hatha yoga, such as the ‘Hatha Yoga Pradipika’, ‘Siva Samhita’ and ‘Gheranda Samhita’ the yogic practices listed there, are intended to purify and raise the energy systems so as to prepare them for meditation.

Yogic anatomy concerns itself with the following subtle organs, layers of the mind and energy networks: the koshas, the chakras, the nadiis, the prana, the vayus and the kundalini. Here I will provide a very brief, introductory overview of the subtle systems, but bear in mind that this is only an introduction which is meant to kindle interest for further exploration and research.

Koshas are translated as “sheaths” or “layers  of the mind” and that’s what they are: each kosha is a subtle layer of the mind excluding ‘Annamaya kosha’ (which is the physical layer or body).

The first layer of the mind is called ‘Kamamaya kosha’ or ‘crude mind’. This is the densest layer which has three functions: 1. sensing external stimuli, 2. having a desire based on the external stimulus, 3. acting to materialize that desire, as in seeing and smelling a chocolate cake, then feeling the desire to eat it and finally acting on it. This layer of the mind uses the body, senses and motor organs to fulfill basic instincts.

The second layer is called ‘Manomaya kosha’ or the ‘subtle layer’. This layer of the mind has four functions: 1. memory (cerebral and extra-cerebral or memory concerned with the present brain and memory concerned with past life memories, respectively, hence extra-cerebral), 2. thinking, contemplating (all computation, and information management happen at this layer), 3. experience of pain and pleasure, and 4. dreaming.

The third layer is called ‘Atimanasa kosha, or ‘supramental layer’. This is the layer of intuition and creativity.

Due to the restlessness of the first two layers most people never experience the higher layers of the mind, starting with Atimanasa kosha.

The fourth layer is called ‘Vijianamaya kosha’, the layer of ‘higher knowledge’ or ‘wisdom’. When this layer is realized a person starts to express higher, noble qualities, such as compassion, patience, tranquility, cheerfulness, enthusiasm, perfect concentration, etc. Most importantly, one is capable of ‘viveka’ – the ability to discriminate between the permanent and impermanent and ‘vaeragya’, or ‘non-attachment’, ‘non-clinging’ to that which inevitably has to go.

The final layer of the mind is called “Hiranmaya Kosha’, or ‘golden layer’. When a person realizes that layer, he or she experiences intense love for the Divine and ecstasy. After the fifth layer there is the Atman or soul, the consciousness which is our true Self, the essence of our being.

Prana is the universal energy permeating the entire cosmos and it manifests as electricity, magnetism and the force of gravity, to name just a few.

This prana becomes pranah or vital energy in the living being. Pranah includes the vital energy of the physical body (prana shako) as well as the mental energy (manas shako). Our breath is the crudest expression of pranah and our thoughts are the subtlest expression of the same, hence there is a close relationship between breath and mind, or slow, regulated breathing and a peaceful mind. This forms the basis of the science of breath control or pranayama. Pranah is being conducted by a subtle energy network called ‘nadiis’, similar to the complex network of electrical circuits conducting electrical energy,

‘Nadii’ means ‘tube, channel or pipe’. Nadiis are subtle, non-physical nerve channels that carry prana throughout the body. There are 72,000 nadiis in the human body, intersecting at various points in the body called chakras. The chakras are related to the nervous plexi (but are not the actual physical nerves and nervous plexi).

There are three main nadiis which intersect at each of the seven main chakras:

The word ‘chakra’ (in correct Roman Sanskrit written ‘cakra’) means wheel. The seven main chakras are psycho-energetic centers which are also the crossing points of the nadiis and are storehouses of prana. They are energetic whirlpools consisting of clusters of subglands. Each subgland represents a certain tendency or propensity of the psyche. The chakras have been described in great detail in tantric texts and have been adopted into yoga from the Tantric lore. You can read more about chakras here.

‘Vayu’ means ‘wind’ or ‘vital air’. There are 5 main vayus and 5 secondary vayus. They are also called internal and external vayus, respectively. Pranah or vital energy is actually a collection of the 10 vayus – 5 internal and 5 external vayus. The vayus govern specific areas of the body and are responsible for the moving activities in the body such as speech, breath, digestion, flow of blood etc.

There is a controlling organ of the 10 vayus situated in the middle of the chest and it’s called ‘pranendriya’ – translated as the organ of pranah. This organ pulsates in synchronization with our breathing. When breathing is fast and shallow, the pranendriya is in a state of speed, the mind is very restless and perception is impaired. When breathing is slow and calm, pranendriya is in a state of peace and the mind is peaceful, while perception is clear. The practice of pranayama regulates and slows our breathing, which in turn calms the pranendriya and mind.

The kundalinii is called the ‘coiled serpentine’ and it represents the divine power or shakti which lies sleeping at the base of the spine. This energy is dormant in the majority of people but once awakened it transforms an ordinary person into a being exhibiting divine qualities. An awakened kundalinii manifests as infinite possibilities of the mind and a great personal power. The kundalinii must be awakened in a proper process of initiation with a siddha mantra (siddha means ‘perfected’). The awakened kundalinii must rise upwards through the sushumna nadii in order to reach the crown chakra where it unites with Shiva or consciousness. For this it has to pierce each chakra. The chakras are like knots closing the passageway of the kundalinii, but through various practices as taught in yoga and tantra by a guru these knots are loosened and the kundalinii can rise. The union of kundalinii shakti and consciousness or Shiva in the crown chakra is considered to be the ultimate attainment of yoga. The bliss of union is experienced here and a person’s existence reaches its final consummation.

Due to excessive emphasis on asana and the physical aspect of the practice on 200h and 300h yoga teacher training courses, subtle yoga anatomy is often left out. This leaves yoga teachers with little to no knowledge about the actual yoga anatomy even after they have completed their TTC.

Those yoga students who are interested to truly understand the breadth and depth of yoga, are advised to find a teacher who understands these subtle concepts and teaches from an understanding of the subtle and energy bodies. This is when yoga starts to work miracles in one’s life and gets to transform all aspects of one’s being and existence. This is when yoga postures become innercizes not just exercizes.